Man in The Box -Revisited 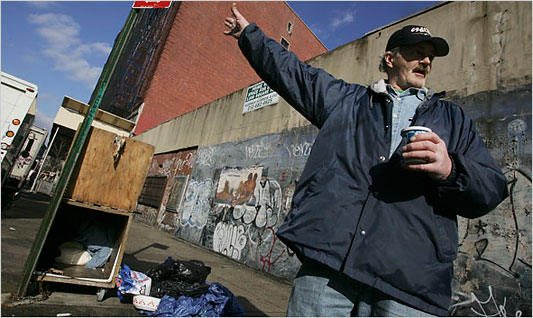 John Cornelius Foley on Broome Street between Bowery and Elizabeth Streets, where he lived for months in a plywood box. (Photo: Ruth Fremson/The New York Times)

His birth certificate says John Cornelius Foley, but on the Bowery he was more widely known for his bizarre home: the Man in the Box.

Mr. Foley, a tall and broad 57, is a walking, talking relic from the old Bowery, a graduate of countless flophouses and men’s shelters and overnight jail cells to the home where I met him at the beginning of the year: a long, wooden box chained to a street sign on Broome Street. This is not exactly the middle of nowhere. People pay a lot of money to live in this neighborhood, and here was Mr. Foley, shimmying into a plywood box without apparent hassle from the police.

I spent several hours with Mr. Foley in February, listening to his wandering tales from the old Bowery days, and wrote a story that found him in a new apartment, one with a roommate and four walls and a door. He had vowed to leave the box behind for good.

The next time I looked at that corner, some weeks later, the box was gone. I often wondered how Mr. Foley was making out, and I thought of him on Wednesday as I passed a bakery where we used to drink coffee together. I stuck my head inside, and there he was, in a “Don’t Tread on Me” T-shirt, his white mustache neatly trimmed above his toothless mouth.

“Sure, I remember you!” he said, and he told me what had happened to his former home.

Anyone who has sold a home, then driven past it later to find a mess and the new owners tasteless, will understand how Mr. Foley came to feel.

He shook his head. “He turned it into a campsite! At one point, he had the whole sidewalk.”

Mr. Foley said he warned the new box owner that the police would crack down, and he even helped him clean up a lbit. After all, he had built the box with his buddy, Fish, and had spent more hours in there than anyone else.

One day, Mr. Foley walked into his apartment on Elizabeth Street carrying a shiny espresso machine. His roommate looked up. “He said, ‘Where’d you get that?’” Mr. Foley said. “‘I said, ‘You’re not gonna believe it.’” The new man in the box was selling junk on the sidewalk, “like some kind of flea market.”

“That didn’t last more than a day or two,” Mr. Foley said.

Sure enough, the police arrived. “The whole thing went into a Dumpster,” he said.

Months later, he is still enjoying the espresso machine, and has found good coffee beans nearby. “There’s a place up here called Whole Foods,” he said. “They sell all that fancy stuff.”